When I was a little guy, I was afraid of most everything.  I think I got this from my mom, because she had a lot of fears. She was always admonishing me to “Be careful” of this and that.  I think a great deal of her life was built around “old wives tales” that she readily passed on to me. 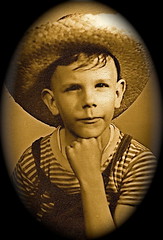 A young boy’s personality is formed quite early.  Either he loves the life of rough and tumble activity or he is drawn to the more creative endeavors and has greater sensitivity to things in his world.  Early on, my personality was clearly in the second of these groups.  I was afraid to take many risks, especially physical risks. “Be careful.  You might get hurt,” Mom would say.  So I was always careful.

My Boy Scout troop back in Kansas often went down to the park by the old band shell to play “kick the can.”  After we’d play for a 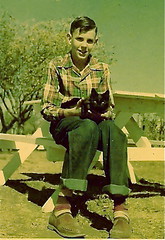 while and have some kind of snack, some of the guys liked to climb up on the structure of the band shell and see how high up they could climb.  I’d get on about the second ledge and fear would take over. I never made it any farther. I hated it that I was so fearful.

When I was a sixth grader and the boys’ PE class went out to play softball, I feared having to bat. “Be careful or you might get hit by the ball,”said the voice in my head. I would stand about two feet from the plate and listen to my classmates jeer that I needed to step closer, hold the bat right, and face the plate and not the pitcher.  Every time my team’s turn came to bat I would pray that we’d get three outs before my turn at the plate.  I was always in defensive mode, never offensive.

online?  The hauberk is a piece of chain mail armour, worn to protect the head and torso of the knight.  Was I just taking a defensive mode again, by selecting “Hauberk” as my user name on the grade school bulletin board I joined online back in the early eighties when educational computers were being networked in my school district?

But it wasn’t my fearful, defensive, sensitive personality that led me to choose that username. I chose it because it truly represented who I was in name:  Armour or Mr. Armour as I was known to the students.  And so, the  Hauberk I am to this day.  Not because I haven’t learned to take risks and need to always protect myself.

Tne Hauberk might be equated to the “breastplate” of any suit of armour.  Ephesians 6:14-15 says, “Stand firm then, with the belt of truth buckled around your waist, with the breastplate of righteousness in place, and with your feet fitted with the readiness that comes from the gospel of peace”. This is the chapter in Ephesians where Paul describes the “whole armor of God”.  He is talking about preparation for war. War that is “ not against the flesh and blood, but against the rulers, against the authorities, against the powers of this dark world and against the spiritual forces of evil in the heavenly realms.” ( Ephesians 6:12 ESV ). So even though the Hauberk (breastplate) is for protection, it is a part of the equipment a warrior wears in battle. With it on, his feet are fitted with the readiness for battle.

i have again chosen theHauberk as my blog name because herein I hope to inspire other men, especially younger men,  to step out in readiness for the many battles they will face in life. So don your Hauberk and the rest of your armour and let’s get going.